MediaRadar, the ad sales intelligence company that tracks how ad dollars are spent, took a look at sports promo spots throughout the month of September, sharing their data with Cynopsis Digital.  Here are their key findings:
– Eight percent of all national promotional ad spots were allocated to Sports Advertisements.
– Within the Sports Promotional Category, Football promos were number 1, making up 63% of spots.
– NFL promos used more than twice as many national promo spots as College football.
– Commercials that only promoted one game made up nearly one third of all national college football advertising. The most promoted college game in September 2016 was when  #1 Alabama opened the season against USC. There were three times as many spots for this game than the next highest, USC vs. Utah.
– There were only 16 more national promo spots dedicated to the NFL season opening game when the Carolina Panthers took on the Denver Broncos. 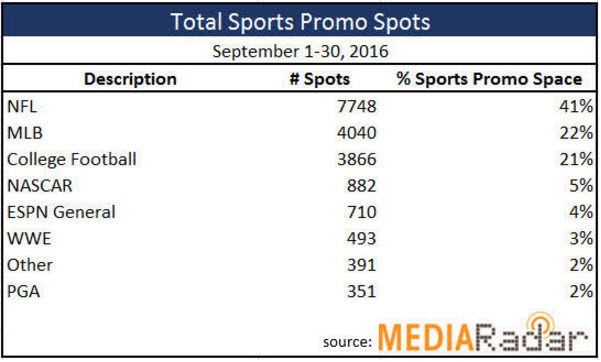