Are You Listening? Podcast Advertising Trends You Need to Hear Today. Download it! →
February 14, 2014 2013 was a rebound year for the magazine industry, as many brands increased their investment in print advertising and the decline in ad pages many magazines had experienced for several years began to slow.  Through the first two months of 2014, several advertising categories have continued to increase their advertising across 158 national consumer magazines, including Beverages (+20%), Home Furnishings (+20%), Medical & Pharmaceutical (+5%), and Apparel & Accessories (+4%).

Another significant sign of the rebound in magazines ad pages is the increase in Financial & Real Estate ad pages after being down 3% overall in 2013. Through February, ad pages in the category rose by 33.5% to 542.5 total pages, versus the same two months in 2013. In total there are 53 financial & real estate brands that placed more ad pages January-February 2014 than during these months in 2013.

Geico, perennially one of the biggest spenders in magazines, was the most active advertiser in the category by a large margin, with its 115.2 pages up from 93.5 pages January-February 2013. Fidelity and Chase followed with 37 and 33 pages, respectively. 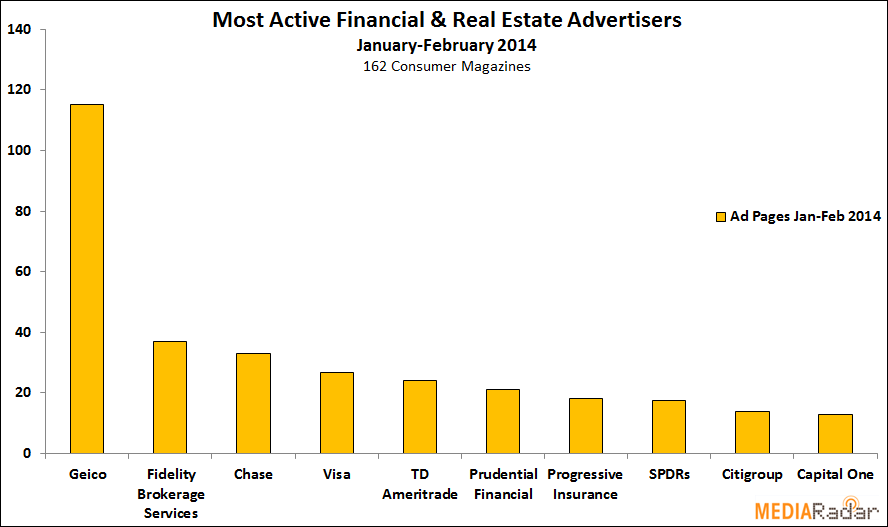 Barron’s achieved the highest share of Financial & Real Estate ad pages in January and February 2013 with 122 pages, followed by Entrepreneur with 94.7 pages.