To avoid deceiving consumers, the Federal Trade Commission (FTC) released Native Advertising: A Guide for Business, which pinpointed the language and layout publishers should be using when producing native ads.

Out of the FTC’s list of ten identifiers, there are six adoptable ways in which to spot native advertising. Two of those ways involve sponsored content.

Sponsored content refers to a brand that “sponsors,” or pays for, content and gets to sit alongside it, despite not contributing to to the content in any manner. 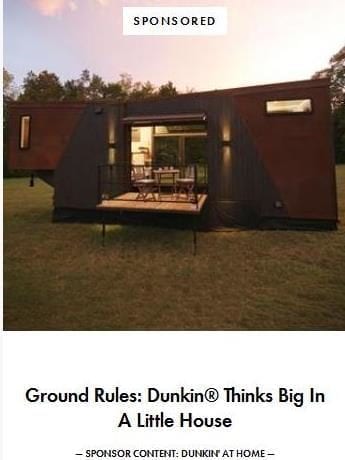 This is an example of sponsored content. While Dunkin’ Donuts is featured in the ad, the brand itself did not help write the Bon Appetit article, which covered the tiny house craze and the global movement toward eliminating waste and promoting sustainability. In the top left corner of the ad above, an online article entitled “sustainable living” from The Guardian is “sponsored by” the home, beauty, and personal care brand.

While the brand uses “sponsored by” to identify it as a native advertisement, Unilever could have just as easily used different terminology, such as “presented by” and “promoted by.” It’s simply a choice of language.

Even though “sponsored by,” “presented by,” and “promoted by” all technically mean the same thing, Unilever should continue to employ “sponsored by” for consistency purposes, according to the FTC’s guide.

Now, that we’ve defined what sponsored content means and have showcased two separate examples of it, let’s delve into the pros and cons of the native format.

One-third of Millennials admit to buying something after seeing a sponsored post, reports a survey by Collective Bias. While consumers reject advertisements because they are insincere and have an ulterior motive to sell you something, most don’t immediately dismiss sponsored content.

Since this type of native advertising doesn’t feel much like a sales pitch, consumers are more likely to interact with it. Plus, almost 37% agreed that useful and high-quality posts negate the content’s branded nature.

Advertisers within the realm of pets, food, drink, family, and parenting love sponsored content because the ads achieve more for them.

According to an AppNexus whitepaper, the click-through-rate with sponsored display ads is approximately 8.8 times higher than with typical display ads.

Sponsored content lends itself to increased relevancy and engagement. Its malleable.

Native advertisers can really succeed by first understanding their audience and knowing when, where, why, and how a piece of sponsored content should be placed to further engage consumers (whether that’s with videos or infographics, for example) and form a tighter emotional bond with them.

If content is more personalized and better suited for a particular consumer, that person will be more interested in it. And, a Reuters survey notes that 75% of consumers say that, if content peaks their interest, then they will engage with it. It doesn’t even matter if the content is sponsored or not.

While these three generations, GenZ, Millennials, and GenX, would dub sponsored content as more trustworthy than traditional ads, not all of them would necessarily engage with that content.

As a group, GenZ consumers tend to engage with sponsored content more than any other generation because they find it more visually entertaining, thought-provoking, and impressive in the long-run.

While sponsored content has strong benefits, there are still disadvantages surrounding the ad format.

1. Measuring performance is difficult, if not impossible

Without a system of unified standards, it’s nearly impossible for advertisers to measure the sustainability and performance – rate of renewal, return on investment (ROI), impact, and effectiveness – of their sponsored posts.

2. Creating sponsored content is a long, arduous, and expensive process

Advertisers must set aside a lot of time, hire a lot of contractor workers, and save up a lot of cash to produce good sponsored content with an entertaining story line and beautiful design. A sponsored campaign requires multiple steps, cross-departmental collaboration, and rounds of review.

This type of native advertisement so seamlessly fits and integrates into a website, matching the platform’s original form and function, that it can easily deceive its viewers.

While the FTC’s guide directs advertisers on how and when to use certain terminology and obvious labels, including “Ad,” “Advertisement,” “Paid Advertisement,” “Sponsored Advertising Content,” “Presented by,” “Promoted by,” and “Sponsored by,” to be fair and clear with people, consumers may still wind up duped into thinking a native ad is. simply, content.

According to the recent publication of MediaRadar’s In-Depth Look Into the Current State of Native Advertising trend report, the overall growth of native has slowed and the total number of advertisers creating native content has stalled. Only about 11% of online advertisers use native formats now and brands that buy native ads only run them across 10% of the total number of sites that they advertise on.

Since there are more benefits of sponsored content, however, the format will most likely live on. Advertisers aren’t ready to give it up just yet.