To all who come to this happy place, welcome. And buckle up.

After a nearly two-year struggle toward the finish line, complete with a bidding war with Comcast and regulatory hoop jumping, The Walt Disney Co. has completed its $71 billion acquisition of most of 21st Century Fox Inc. entertainment assets.

The deal includes the 104-year-old 20th Century Fox studio, the FX and National Geographic cable networks, and an additional 30 percent of subscription streaming service Hulu (Disney already held a 30 percent stake before the acquisition). With numbers like that, it’s clear this merger transforms things in more than one way.

First, a Move That Transforms the Industry

It’s hard to overstate what the closed deal means. “In this era of ever-accelerating media consolidation, the implications of this deal are pretty staggering,” writes Todd VanDerWerff with Vox Media. Jason Lynch at AdWeek called it one of the “most massive transformations ever” in the industry.

The historic deal is notable for consolidating the number of major Hollywood studios from six to five. It will allow Disney, already one of the largest, and certainly the most recognizable, entertainment companies in the world to aggressively compete with Netflix, its ever-growing rival.

According to MediaRadar data, the networks Disney bought from Fox should push Disney to the #1 spot in terms of market share for the national TV ad market. The new Disney will just barely edging out NBCUniversal. If advertiser buying behavior remains consistent, Disney & NBCUniversal will likely account for over 4 of every 10 dollars spent on national TV advertising. Of course, consumers are most preoccupied with the fact that Disney now owns some major Hollywood favorites and franchises. VanDerWerff goes on to write that the deal gives Disney, “which has long been associated with family entertainment, a whole bunch of new brands that are more closely associated with stories aimed at adults.”

But, from the outset, the acquisition has been about more than adding the X-Men to the Marvel Cinematic Universe or rounding out distribution rights for the Star Wars franchise. It has been about consumer reach and the platforms that facilitate this reach.

Just weeks after the talks were announced, 21st Century Fox executive Lachlan Murdoch spoke to the importance of the deal: “There’s a lot of talk about the growing importance of scale in the media industry,” Murdoch said in late 2017. “Sub-scale players are finding it difficult to leverage their positions in new and emerging video platforms. We have the required scale to continue to both execute on our aggressive growth strategy and deliver significant increased returns to shareholders.”

Nearly two years later, shareholders, media buyers, ad agencies and competitors will begin to see the fruit of that statement. The ramifications of the deal in ad sales and how media buyers advertise with over-the-top television and cross-platform offerings will soon take shape.

Second, A Move That Transforms Both Ad Sales and Ad Tech

The move will likely strengthen current ad sales relationships just as much as it will create new relationships. According to MediaRadar data, Disney and Fox had a lot of overlap when it comes to their advertisers. In 2018, 57% of the advertisers running ads with the two companies were doing so with both of them. If advertisers keep their buying behavior consistent, Disney will gain control of about 100 advertisers they previously shared with Fox. They will also take over relationships with about 130 advertisers who were with Fox via Nat Geo & FX Networks but not on any Disney owned properties. 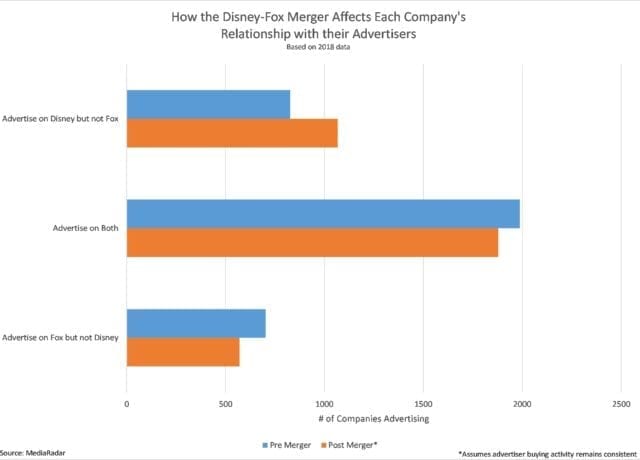 Not all changes will be overnight. Only time will tell what the new landscape will actually look like. “It takes a long time to pull off a cross-channel, cross-daypart, cross-platform execution, no matter how established you are,” said Carrie Drinkwater of MullenLowe in an interview with AdWeek. “It’s going to take a lot of effort and smart people who are willing to dig in and do it.”

The deal could also easily signal the start of the streaming wars’ biggest battle yet. On-demand video and over-the-top television are reshaping the entertainment industry, and Disney’s massive growth with this deal will only accelerate the change.

Brian Steinberg at Variety writes that, while the merger doesn’t give Disney the most airtime, it does give the media giant more scale “at a time when TV companies are being outpaced by consolidation among cable and satellite distributors, all the while fighting off audience migration sparked by the availability of programs on mobile devices and streaming video.” In other words, advertising with Disney (and, as a result, many of its competitors) could get high tech, and quickly. For example, Disney acquired TrueX in the deal, which focuses on digital ad engagement. It’s just one piece in the larger puzzle, but it is telling.

We will likely see a tech shift in the way Disney distributes in the coming months and years – not the least of which will be the much-anticipated Disney+.

Disney may be a relative late-comer to streaming services, but it may just create new norms for programmatic and cross-platform advertising as Disney competes with Netflix, Amazon and updated advertising offerings from NBCUniversal and others.