While native advertising is widely used among advertisers and publishers in the online space, it is also still growing at an impressive rate.

In fact, last month, over 900 brands ran native ads for the first time!

Every month, MediaRadar analyzes thousands of brands utilizing native advertising. Then, each month, in our Native Advertising roundup, we take four noteworthy campaigns and highlight them, while offering some insights into each brand’s native advertising strategy.

Last month, we saw some interesting native advertising campaigns and statistics from the likes of Homegoods, Inc., Reebok Classics, Wendy’s, and Nationwide Insurance.

Let’s take a look at this month’s highlights in native advertising:

Charles Schwab Bank launched its first native campaign in the middle of February:

Their initial ad ran simply with their logo and a tag reading, “A Decade of Results.” The ad ran on Planadviser on February 12th: Since it launched, the campaign has spanned 10 websites in total. Aside from Planadviser, Charles Schwab’s native ads have also run on sites such as National Review, Salon.com, CNET, and more.

Here are a few more examples of Charles Schwab’s native advertising from the last 30 days, as they provide readers with the “How-to’s” for traders: In the past 30 days, native ads have been attributed to sixteen of AT&T Inc.’s child brands, most notably, AT&T Next and DirecTV. Collectively, the campaigns span over 20 websites.

In total, about 30% of the advertisements tracked for AT&T’s sixteen child brands were native ads.

Let’s take a look at a couple of examples from this month, from DirecTV and AT&T Next: MetroPCS is ramping up its native advertising efforts, as they continue to add more new sites to their campaign. In the past 30 days, their campaign has expanded to over 35 websites. They have a renewal rate of 15% and an average native duration of one month.

Out of the 35+ sites where they’re running native, many are local sites – for example, NJ.com, sfgate.com, and area-specific live-weather sites.

It also seems as though MetroPCS likes to play on nostalgia and poke a bit of fun at what older cellphones used to do – or what they used to not do: 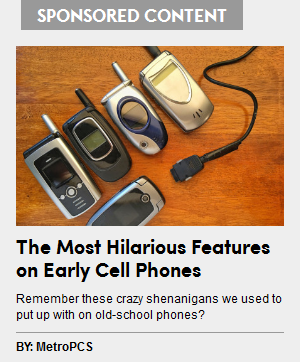 As you can see by the ads, we’ve come quite a long way from our “old” technology…

Lastly, is Walt Disney Company brand, DisneyVacations.com. They recently launched their first overall advertising campaign in late February. The campaign is comprised solely of native ads, both mobile and display.

The campaign currently spans 11 websites, including Macworld and Nola.com.

Disney Vacations native ads focus on the beauty of going on vacation – the family, the beaches, the sun, Hawaii… After all, what better pitch is there than Hawaii?