Are You Listening? Podcast Advertising Trends You Need to Hear Today. Download it! →
Today’s TV ads are getting shorter and shorter. According to MediaRadar’s In-Depth Look Into the Current State of TV Advertising trend report, from the first half of 2017 to the first half of 2018, the length of the average national TV ad decreased by 3% and the number of national TV ads that last 15 seconds or less grew 9%. The amount of purchased five to six-second national TV ads, which take over most of the screen during a program’s downtime, but don’t halt the broadcast, also increased more than ten times year over year. Despite the shorter air times, top brands continue to spend their advertising dollars on TV. Below is a list of six example brands who ran six-second spots towards the first half of 2018. 1. Dodge
From June 11th, 2018 until July 27, 2018, the American auto manufacturer, Dodge, ran a TV ad that lasted just under six seconds for exactly 47 days. It aired over 60 times on 10 different networks like ABC and cost more than $200,000. In this ad, three different men, probably all a part of  the”Brotherhood of Muscle” group, race three different colored cars. The commercial wants its viewers to associate Dodge cars with being American, but also wild in nature, which is why it ends with the words, “Domestic. Not Domesticated.”

2. Subway
For 80 days, the American fast food restaurant franchise, Subway, ran a five-second ad between June 21, 2018 and September 8, 2018. In the commercial, a spacecraft abducts a Subway sandwich with the question, “Seeing Subs?” It aired almost 450 times on 29 different networks like ESPN. The total cost was over $300,000.

3. Credit Karma
Beginning on August 5, 2018, Credit Karma, the American multinational personal finance company, ran a five-second ad until August 23, 2018. For 19 days, the commercial aired on three different networks like Discovery for close to five different times. The company spent nearly $1,500 on an ad that showcased a young woman, who desperately wanted to move out and away from her annoying Millennial roommate. The ad slogan quite fittingly said “Keep moving forward.” 4. IKEA
The Swedish-founded multinational group that designs and sells ready-to-assemble furniture, kitchen appliances, and home accessories also ran an ad just under six seconds. A close-knit family sitting down for a lovely dinner outside helped to advertise IKEA’s home furniture. The commercial aired for 108 days between May 22, 2018 and September 6, 2018. It ran just over 30 times on 13 different networks like FYI (formerly Biography Channel) and cost more than $20,000. 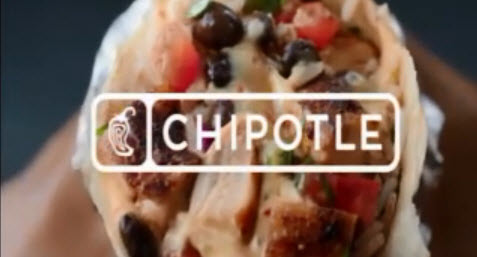 5. Chipotle Mexican Grill, Inc.
Another American chain of fast casual restaurants, Chipotle, ran a five-second ad for one month between April 28, 2018 and May 27, 2018. It aired on four different networks, including TNT, nearly 40 separate times. In this roughly $160,000 commercial, Chipotle hints at the fact that the company doesn’t have a bad side, just like their cooked chicken and other meal options. 6. PepsiCo
In their nearly six-second ad, PepsiCo, the carbonated soft drink manufacturer, highlights their Pepsi Zero Sugar drink, calling it “delicious” and “refreshing.” The commercial first aired on September 27, 2017 and last aired on April 1, 2018. Over 187 days, the ad ran almost 350 times on 22 different networks like FUSE TV. It cost over $130,000.
Six-second ads normally run during sports programs. But, knowing six-second ads still pack a big punch, other networks are now airing these types of commercials as well. Some of those networks include ABC, Discovery, FYI (formerly Biography Channel), TNT, FUSE TV, MTV, TLC, and Freeform.
Six-second ads on TV actually “capture 8% to 11% more attention per second than longer ads,” according to MarketingDive.  This increased “interest in extra-short ads among advertisers and networks comes as TV watching habits and attention spans are changing.” Yes, eMarketer’s report signals that consumers prefer shorter ads, regardless of the platform, but comScore specifically believes that Millennials in particular will prefer these five-to-six-second ads.
Research has shown that these short-form ads might work best for immediately recognizable brands like the ones numbered in this list. That’s because they don’t necessarily need to lay the groundwork of what they offer. Even so, those marketing less recognizable brands will most likely increase their investment in the format too since they see the power of six-second ads.