To put this into perspective, Instagram, arguably the second most popular social media network, has about 2b MAUs.

The point is that Facebook is huge and always will be, which is why we’re not surprised that advertisers are spending an almost unbelievable amount of dollars on ads.

Our upcoming trends report looks at Facebook ad spending in 2021: which industries are investing, which ones aren’t and what it means for the future of advertising on the world’s biggest social media platform.

Here’s a sneak peek at what you can expect: 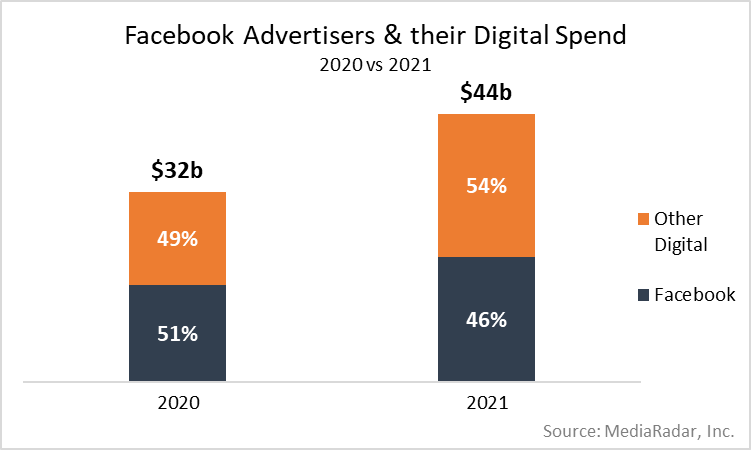 Any reserved spending habits that advertisers may have embraced over the past couple of years are gone.

What drove this increase?

A giant wave of advertisers. 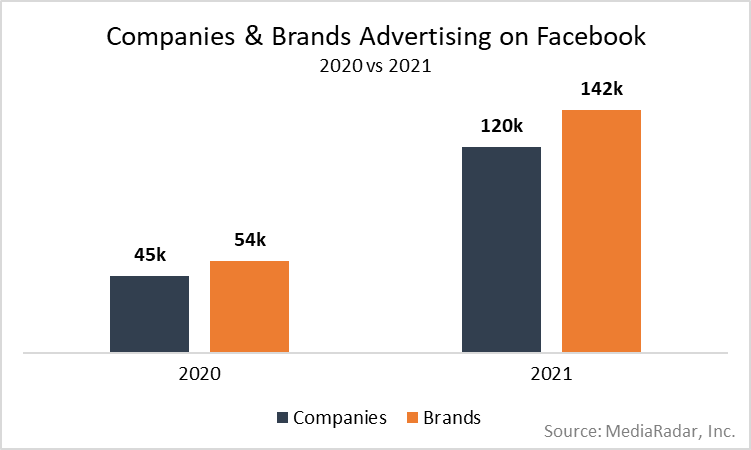 Unsurprisingly, many of these ad dollars came in the months leading up to the holiday season, thanks in some part to Facebook’s push to get brands thinking about their campaigns well before the holidays. 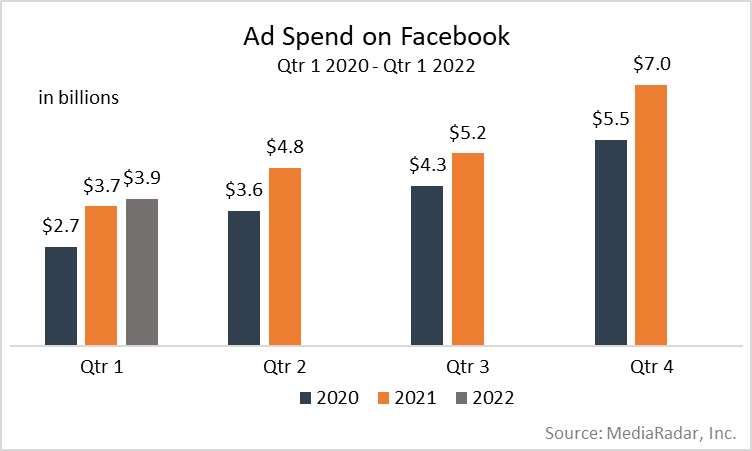 The holiday-fueled ad spending comes during a time in Facebook’s evolution when it’s investing heavily in social commerce.

In June 2021, Facebook launched several commerce-focused features, including personalized Shop ads and visual search, the latter of which lets people find similar products by tapping on an image.

As Facebook makes it easier for companies to generate revenue on its platform, ad dollars will follow—as they have so far in 2022.  In Q1, ad spending was up by 6% YoY from Q1 2021.

It’s clear that, despite some negative press including a class action suit on its ad metrics and reports of a smear campaign against TikTok, companies are spending big.

Retail Up; Tech Down

Who exactly is spending big? Retail, for one.

In 2021, retail advertisers increased their Facebook ad spending by 129% from the previous year as they collectively took advantage of one of the strongest years in retail history.

After spending relatively little in 2020 due to the fear of COVID-19 and business closures, retail advertisers are back and coming in hot. In fact, total retail sales grew at an annual rate of 14%, the highest in more than 20 years. 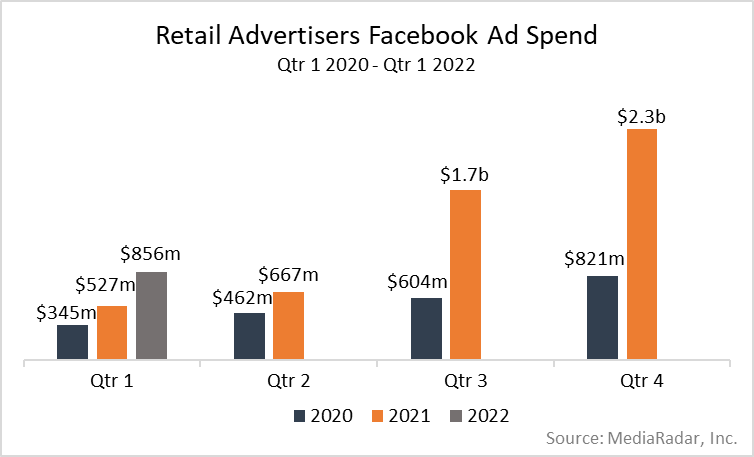 Of the retail advertisers, those in the auto industry made one of the biggest splashes, increasing their spending by over 22x from what they invested in 2020. A level deeper, used car dealerships increased Facebook ad buys by 403% YoY, undoubtedly due to the increased demand for used cars.

That said, not all advertisers were bullish on Facebook.

Technology advertisers decreased their spending by 28% YoY in 2021.

Driving that decrease were software advertisers who spent 41% less on Facebook ads in 2021 than they did in 2020.

Of these software advertisers, one of the biggest decreases came from Capital One, which reduced spending for Capital One Shopping by 71% YoY from 2020.

In addition, ByteDance, which owns TikTok, essentially eliminated Facebook from its digital advertising mix, spending 98% less than it did last year.

For ByteDance, the decrease has less to do with its overall business health and more to do with the rise of TikTok and its desire to grow that user base. 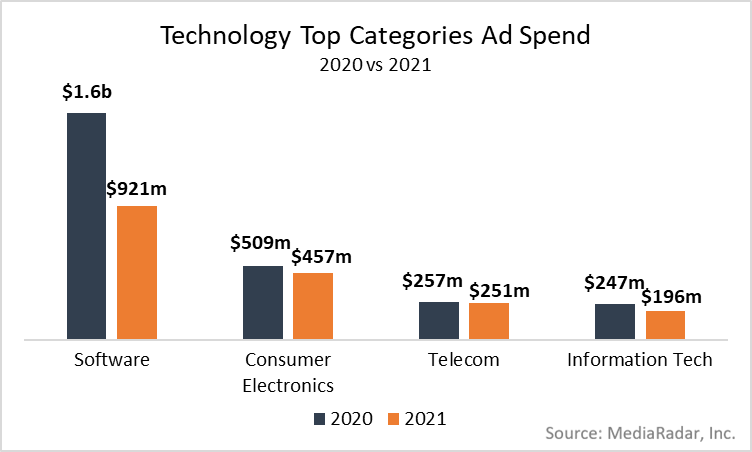 Retail advertisers weren’t the only ones spending big on Facebook in 2021; service providers did as well.

In 2021, service providers increased their spending by 55% YoY as more than 25k companies bought ads on Facebook (213% more than in 2020). More than half of these ads came from companies in six categories: medical and dental, associations like AAA, AARP and NHL enterprises, home maintenance (due in large part to the rise in working from home), staffing, and recruiting.

Staffing and recruiting in particular saw a boost in Facebook ad spend—exceeding ad investment of $100M—in the wake of the “Great Resignation” and the parade of people looking for new jobs. 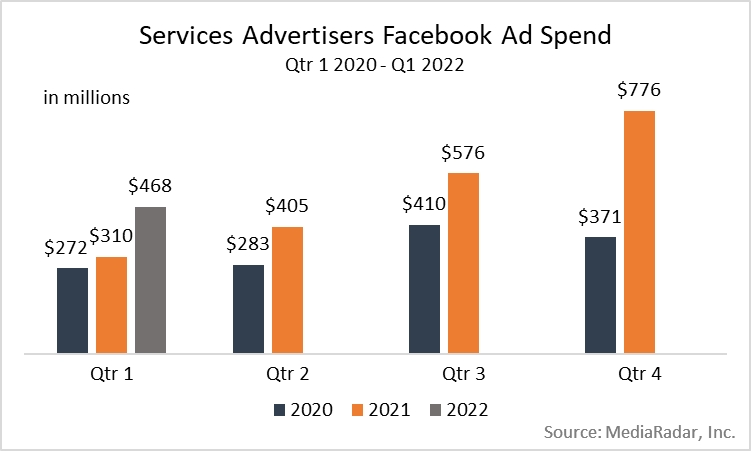 Despite younger generations opting for other social media platforms like TikTok and Snapchat, most advertisers are sticking with ol’ faithful Facebook.

While other platforms are growing exponentially—TikTok reached 1b MAUs in 3 fewer years than Facebook—Facebook’s reach is too vast and its ad tech too advanced for advertisers to veer from such a proven path.

Want more insight into Facebook’s dominance and how advertisers spent on it in 2021? Stay tuned for our upcoming report that dives deeper into Facebook advertising trends.