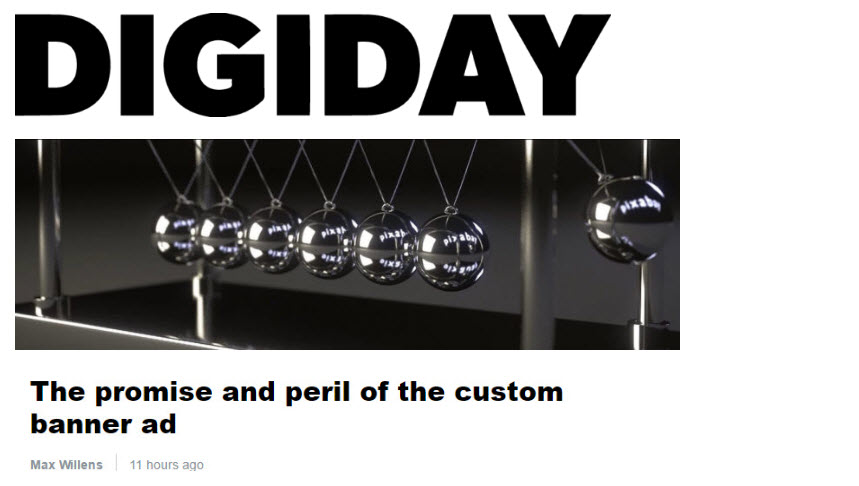 The internet advertising pendulum is swinging again. With the price of banner ads as low as ever and readers consuming more and more content on mobile, publishers are ditching the standardized banner ads for custom formats.

Most recently, The New York Times released Flex Frames ads, which are designed to be more harmonious with the look of NYTimes.com. But it’s hardly the only publisher. Digital publications including Vox and Quartz have all spent years selling custom display units, and more recently, publishers like Slate, which earns more than a third of its revenue from display, have focused lately on selling custom display rather than programmatic inventory. “This is not a new thing,” Slate president Keith Hernandez said. “But it seems to have become en vogue recently.”

There are two possible reasons for the shift. Banners were never an ideal vehicle for advertising on the web, but they could be bought and sold by the ton, which made them attractive for advertisers chasing scale. Today, people are shifting media consumption to mobile, where there’s less real estate for banners and publishers have begun embracing native, which fits better into their feed-like pages.

But the banner is still a multibillion dollar market, accounting for nearly $8 billion of revenue across the industry in 2015, according to the IAB. And today, some publishers feel that their best chance to make money from banners is to develop and sell their own.

“Either you let the display business languish over time and it’s just a race to the bottom, or you attempt to innovate,” said Sebastian Tomich, svp of advertising and innovation at the Times.

For years, the banner ad was the workhorse of digital advertising, and what a miserable nag it was: Banners had diminished click-through rates, stymied publishers’ web designers and infuriated a generation of readers who saw sites get more and more crowded with ads. “It’s been done wrong for so many years,” said Stephani Estes, vp of digital strategy at media agency Cramer-Krasselt. “It’s why we’re starting to see things like ad-blocking come up.”

Estes, who says she’s seen an uptick in non-standard display recently, noted that banners do still serve a purpose. “We think of it more like outdoor,” she said. “It’s about a very brief message.” And publishers have improved on them, making them more targetable and building private marketplaces that allow them to sell the context of their sites and the specifics of their audiences at the same time.

But after nearly 10 years of falling banner ad CPMs, a growing number of publishers are walking away from standard banners altogether. The Times, for example, said banners are visible on just 30 percent of its pages now, and it means to lower that number further next year by focusing purely on Flex Frames.

But the more these units proliferate, the more the industry risks running into the so-called “manufacturing problem,”where the abundance of ad types undermines the efficiency of buying digital ads.

That overabundance — there were more than 250 display ad types in 1996 — was why the IAB set out to establish guidelines in the first place, and it has been a problem the industry body has had to beat back again every few years. “It was getting crazy,” Alanna Gombert, gm of the IAB Tech Lab, said of the last time her team shrank the list of ad types IAB offered guidance on.

Things likely won’t get that crazy again. Publishers are far less reliant on display than they used to be, and indeed many of the publishers hawking non-traditional display depend on it for a small share of their overall revenue. But it’s also unlikely that the non-standard units will start boosting display’s overall share in their bottom lines. Even though publishers like the Times have plenty of research showing that their custom units outperform standard display, advertisers can’t quite always easily compare them to alternatives. “It’s a bit of a self-fulfilling prophecy that these perform well,” said Todd Budin, svp of Nielsen’s marketing effectiveness product, Nielsen Brand Lift. “The norm can be a pretty low bar.”

But if these custom units help slow display’s slide, the thing that’s going to replace it — native — is growing quickly. More than 350 publishers have started selling some kind of native advertising in the past year alone, according to MediaRadar data, and the percentage of the native ads they’re selling has more than quintupled, to more than 11 percent.

As native ramps up, it may go through the same cycle of commoditization and customization. “Every single story in ad tech follows the same trajectory,” Gombert said.