Are You Listening? Podcast Advertising Trends You Need to Hear Today. Download it! →
May 22, 2014 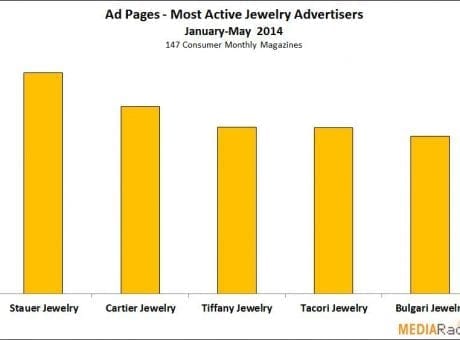 Magazine media advertising for jewelry brands typically peaks twice during the year: around Mother’s Day and in Q4 for the holiday season.

Data analyzed for MPA-The Association of Magazine Media by MediaRadar, reveal a particularly strong push around Mother’s Day. Jewelry advertising is up by 15.3% to 732.3 total pages January-May 2014 versus the same period in 2013, as measured among 147 national consumer monthly magazines.

Perhaps surprisingly, the advertising push for Mother’s Day in April and May is typically greater than in February for Valentine’s Day, and this year is no exception. The Mother’s Day push this May was particularly active for jewelry advertisers, with 225 total pages up 57.1 from May 2013. Comparatively, there were just 110.8 ad pages for jewelry brands in February 2014 – up from 92.7 in February 2013.

Stauer was the most active jewelry advertiser January-May with 60.2 pages for their Necklaces and Rings lines, followed by Cartier Jewelry with 51 pages.